Vector control experts say the risk of contracting the West Nile virus from infected mosquitoes is down this season compared to what it was two months ago.

Vector control experts say the risk of contracting the West Nile virus from infected mosquitoes is down this season compared to what it was two months ago.

In July the outlook was markedly different—although the mosquito counts were down, more of them were testing positive.

MacAdam said the risk level today is down because of the county’s on-going mitigation efforts such as fogging and spraying hot spots coupled with using larvicide along the West Wetlands to kill larvae.

“This year we expanded our partnership with YCPAD by working alongside them in their lab to identify and test mosquitos. We receive the results in less than 24 hours and know if any areas have infected mosquito populations,” Alspach said.

As part of Cocopah’s annual Fight the Bite campaign, the tribe’s EPO distributes mosquito repellants to the Native American community free of charge.

“We have also utilized social media to provide updates on our testing efforts and encourage everyone to take precautions. The pairing of YCPAD’s technical expertise with Cocopah’s communication resources has created an effective partnership to address this public health issue. It’s encouraging to see our local districts and tribes working together to keep our community safe,” Alspach said.

West Nile virus is the leading cause of mosquito-borne disease in the continental United States, according to the Centers for Disease Control’s website.

Most people infected with the virus do not feel sick, however, about 1 out of 150 infected people develop encephalitis, a serious, sometimes fatal, illness.

There have been no reported human cases of the West Nile virus or the St. Louis encephalitis virus in Yuma County this season, according to the Yuma County Public Health Services District. 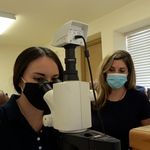